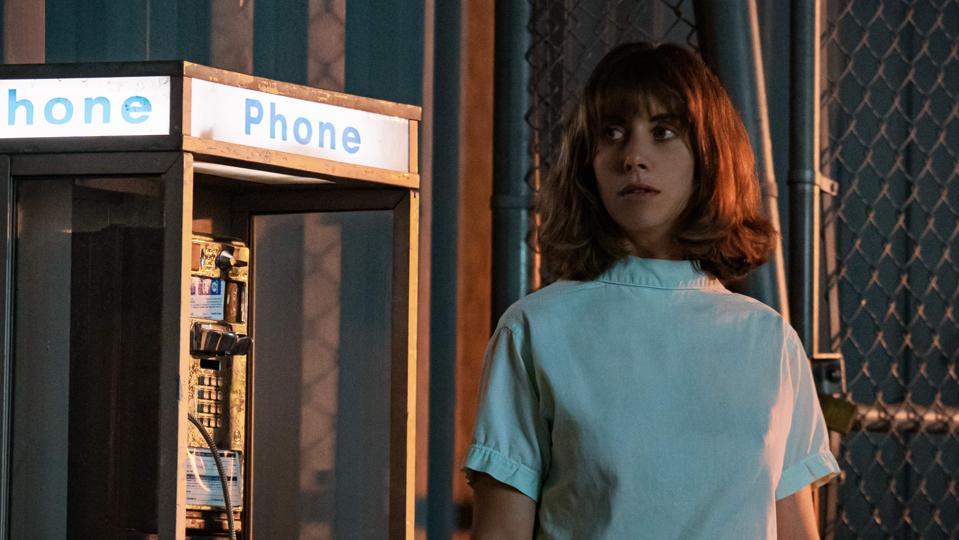 After premiering at Sundance Film Festival last month, Horse Girl made its streaming debut on Netflix today. The film starring Alison Brie became available this morning—and yeah, it’s a doozy. What seems like a simple set-up about mental illness at first quickly becomes a rabbit hole of sci-fi jargon and conspiracy theories.

Brie’s character, Sarah, opens the film as a seemingly awkward, lonely girl who has trouble making friends—a common struggle for many. But the strange, surreal path Sarah takes us down is anything but relatable. She wakes up in the middle of the night in random places; she has prescient dreams where she sees people she’ll soon meet; she begins to believe that she’s regularly abducted by aliens. We soon begin to realize that Sarah may have some serious mental issues.

Or…does she? Could this all be real? Is she stuck in a time loop? Is Sarah, as she believes, actually her grandmother whose been transported to the wrong space in time?

You can quickly get lost as you try to explain away all of Horse Girl’s disparate elements. After a fairly normal, humdrum beginning, the film rapidly dissolves into the crevices of Sarah’s warped outlook on the world, forcing us to play catch-up—when, in reality, the movie’s plot is quite simple. It only becomes complicated when we take everything at face value, and fail to recognize Sarah is manufacturing a false reality.

In order to understand Horse Girl, we simply need to grasp the film’s core exploration. The movie isn’t about time travel or aliens or horses—it’s about psychotic depression; it’s what can happen when we lose touch with reality and fail to trust our own minds; it’s an encapsulation of how difficult it can be to admit we’re depressed.

Essentially, psychotic depression is a troubling, but rare condition that affects someone who has experienced both severe depression and a break with reality.

Living Better Together: Japan’s Bold Move To Fight Dementia Means Adapting To It

How To Build A Culture Of High Expectations

This is quite different from the traditional understanding of depression, which is a much more common yet still perturbing medical illness. True depression is a step above the natural sadness and grief that almost everyone experiences. When you’re grieving, painful feelings will come in waves—when you’re depressed, it begins to feel like a new way of life. It’s constant, as opposed to intermittent.

Psychotic depression, however, is so intense that you can’t deal with your current state of being—which can result in a psychotic break from reality. That loss of contact with what’s real can take the form of hallucinations, mental disorders and delusions.

But more than anything, treating psychotic depression requires effort from both yourself and the people around you. Failure on both ends can result in a true psychotic break from reality.

The Trouble with Admitting You’re Depressed

It should come as no surprise that it’s difficult to admit when you’re depressed. It can often be difficult to spot signs of depression in somebody, so it often falls upon the victim to actually come forth and seek help. Unfortunately, depression—and especially psychotic depression—is an illness people are often ashamed of and they view it as a weakness.

But the true difficulty in admitting that you’re a victim of psychotic depression is that it means departing from the false reality you’ve created. When you’ve transitioned into this aggressive level of depression, you begin to reshape your reality in order to build a happier, more stable environment for yourself.

“The delusions or hallucinations of people who have psychotic depression often involve beliefs, voices or visions telling them that they are worthless or evil,” writes Everyday Health. “In some cases, people may hear voices telling them to harm themselves.”

Obviously this recalls Sarah’s story in Horse Girl, as she begins to believe that she’s a clone, that she’s being abducted by aliens, that she’s actually her grandmother transported through time. What seems like a ridiculous sci-fi storyline is actually quite reflective of what many people suffering from psychotic depression experience.

For Alison Brie’s character, admitting she’s depressed means accepting a reality that has taken her mother, that has shattered her close friend’s mental state, that has stolen away her childhood horse. It’s much easier to live in a world full of different rules that can only be understood by herself. Remember that when Sarah visits the psychiatric hospital, she claims she is not depressed. On a scale from 1 to 10, she says she’s a 1.

This is why Darren intrigues Sarah so much, because he shares a name with a character from her favorite show, Purgatory. That show was very important to her and helped her get through the trauma of her mother’s death. Sarah romanticizes the idea that she was destined to meet Darren because that is so much more exciting than the dull life she currently leads. That’s why she entrusts so much of her crazy conspiracy theories to him, because she believes him to be part of an alternate reality where they were predestined to meet one another.

But when Darren confronts Sarah and says her ideas are crazy…that’s a break from the false reality she’s created. That’s why she pushes back against Darren. That’s what sends her down a rabbit hole of insanity—this is the psychotic break.

Dealing with a Psychotic Break

It’s important to remember that a psychotic break isn’t just something people in straightjackets experience. You likely walk past people dealing with intense depression all the time, and a break from reality is merely a way many people cope with this condition. You can be experiencing extreme psychosis and schizophrenia…and believe everything is totally normal.

That accurately describes Sarah’s state of mind in Horse Girl. The only difference between Alison Brie’s character and many other people is that she’s slowly unraveling. People who admit they’re depressed and seek help can recognize their own delusions and begin to turn things around. But Sarah has doubled down on her false perception of reality, to the point where she’s literally transported herself to another point in time to push herself further away.

Often, overcoming a psychotic break requires help from those around you. Unfortunately, people are often unequipped to handle such behavior and ignorant of psychotic depression’s ramifications—which is on full display in Horse Girl. Sarah’s roommate, the roommate’s boyfriend, Darren, Gary, Joan—they’re all aware of Sarah’s mental troubles, but unable to push her in the proper healthy direction.

Which is what ultimately triggers the ending of Horse Girl. While we can try our best to explain away the time traveling elements of the film by fitting them into some alternate sci-fi reality…Horse Girl is, at its core, a very realistic movie. Because Sarah has nobody in her life to properly care for her, she manufactures a false connection with her grandmother. In this new reality, she doesn’t have to deal with depression—she can simply be one with a woman who will be able to care for her.

Ultimately, the wacky ending where Alison Brie’s character floats into the heavens and splits through the very fabric of time is nothing more than a metaphor. This isn’t time travel—it’s a cry for help. And the movie ends before we ever get to find out if Sarah finds it.

This dour ending makes Horse Girl an ominous, realistic depiction of psychotic depression and how important it is to recognize signs of depression in people.